A series of three blog posts about being a first runner-up.

I have won one pageant in my entire life.

I know what you are thinking: But Monica, there’s a portrait of you with a crown fastened to your head that hangs in the Hall of Honor (aka “the Hall of Hair”) at Oklahoma City University. Aren’t you a pageant girl? 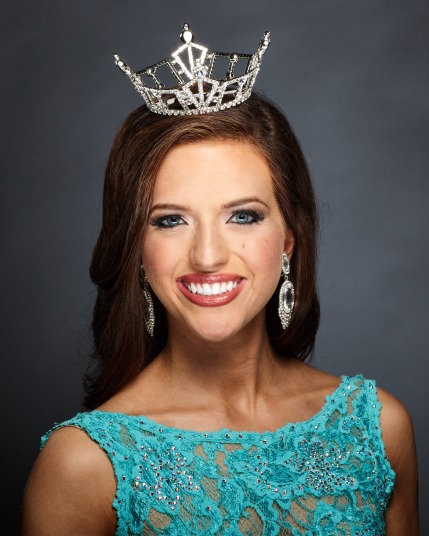 I did not grow up doing pageantry. No one in my family has ever competed in one. But I do remember watching the Miss America pageant with my mom. She has an uncanny ability to watch the contestants introduce themselves and be able to pick the winner.

I was not the little girl who would watch Miss America and then go upstairs, don her fanciest dress, and put on a show for her family. I was the little girl who went up to her room, shut the door, put on a dress, looked in the mirror and thought, “I’ll never be able to do that.” Competing in a pageant was a secret dream that I never, EVER thought would come to fruition.

But that all changed at the end of my senior year of high school.

There I was, accepted into some of the top performing arts colleges in the nation. Most of them were private universities. You know what that means: $$$$$$$$$$$.

I told myself not to worry. I was graduating within the top five percent of my class. I was talented, smart, and driven. Surely a university would fork over a large scholarship on my behalf.

I told myself not to worry. My granddaddy had left money for my sisters and me to attend college. While true, there is a sad ending to that story. For those who are close to me, you know that my parents went through a hostile divorce when I was thirteen years old. The picturesque family that I thought I had as a child was ripped apart. Though I won’t go into too many details with this post, it turns out that my father cashed in my college fund. He justified this action by saying I lacked communication with him.

I place great importance on the value of education; once you have it, no one can take it away. But when my father took that money, I literally had zero dollars to pay for college. My dream of going to college seemed very far out of reach.

Since the divorce, I had grown up in a single parent household. Though my mom worked full time, we struggled financially. I was at a loss for what to do.

Then one day, out of the blue, a friend from high school reached out to me. She had won Colorado’s Distinguished Young Woman Program two years before and wanted to know if I would be interested in competing. To be clear, the Distinguished Young Woman Program does not market itself as a pageant. But what do they offer? A large amount of scholarship money.

That was enough incentive to get me to compete. That is the beginning of my pageant story.

I went into Distinguished Young Woman of Colorado having watched a few YouTube videos of the National Competition in Mobile, Alabama. But honestly, I had absolutely no idea what I was doing.

My mom and I had been traveling around the country for my college music auditions and bought my blue, swishy cocktail dress from a David’s Bridal in Oklahoma.

When I arrived at the competition, I remember meeting the other girls. Many of them had competed in previous years or in other pageant systems. The organizer sat us in a circle and explained the different phases of competition: Scholastics (25%), Interview (25%), Talent (20%), Fitness (15%), and Self-Expression (15%).

And then I heard every other girl in the competition say the exact same thing:

“My interview was GREAT.”

“I think that was a winning interview!”

We spent the rest of the day rehearsing and preparing to compete that night. Before the event, the girls stood in a circle and said a prayer. There is a misconception in pageants that the girls hate each other backstage. I have never found that to be true. It is hard to explain the camaraderie that is formed during competitions.

The first category of competition was fitness. Don’t worry–no swimsuits–but a literal workout routine onstage. I wore my mom’s old sneakers during this portion with my black leggings from Target. #stylish  They asked us to wear brightly colored tee shirts.

Let’s put it this way:

I sang “You’ll Never Walk Alone” from Carousel, although I mistakenly told the emcee the title of the song was “When You Walk Through a Storm”.  (The music theatre major in me died a bit.) My background track was piano which I played and recorded on my phone a few days before the competition. I didn’t win the talent portion.

And last but not least, there was a self-expression category (the onstage question). I ended up talking about my journey–from not even getting a callback after my first musical audition to performing in front of 5,000 people four years later (stay tuned for that blog post).

I was having fun despite the fact I had no idea what was going on.

As we were called back onstage for the awards, I could not believe it when I won both interview and self-expression preliminary awards!

Then I was called as First.Runner.Up.

Being the First Runner Up at Distinguished Young Woman of Colorado gave me hope that maybe, just maybe, I could do pageants.

Funny thing, after the competition I was approached by a woman who had read my program book bio. It mentioned I was interested in attending Oklahoma City University. Her daughter happened to be a graduate of OCU and she knew of a pageant program that offered a great scholarship to the winner. That pageant was America’s National Teenager.

Is God’s timing cool or what?

What I learned from the Distinguished Young Woman Program:

-I could be successful in a pageant.

-I could earn scholarship money.

-There is community in pageantry.

My first three blog posts will be about my experiences as a three-time first runner up. It’s difficult. It is hard to be so close to your dream, so many times, and not win. But I have also learned that the journey is more important than the crown (or in this case, the medal).

Looking back at these pictures from Distinguished Young Woman, I think about the woman I am today. Pageants have pushed me spiritually, mentally, emotionally, physically. Because of pageantry, I am resilient, I am passionate, and I am a college-educated woman.

I can’t wait to reflect on my times(!) as a first runner up with all of you.