If you read my last post, you know that a new acquaintance recommended America’s National Teenager Scholarship Organization (ANTSO) after her daughter was able to get a great scholarship to Oklahoma City University for participating. (If you need a refresher, that blog post is here: https://alittlebitofmonicasite.wordpress.com/2017/08/30/being-a-first-runner-up-part-one/ )

This wasn’t just a great scholarship:

The winner of ANTSO received a FULL TUITION scholarship to Oklahoma City University.

Disclosure: OCU no longer offers this scholarship to participants.

Fast forward to the summer of 2013. I had just graduated from high school when I flew to San Antonio, Texas to compete in America’s National Teenager. That’s right. I went straight to Nationals. With this particular pageant system, only certain states have a regional pageant that sends a representative.

SURPRISE . . . I was not Miss Colorado’s National Teenager (that title had already been assigned); I was Miss District of Columbia’s National Teenager. It was one of the few remaining titles that no one had claimed and for which there were no locals or state competition. So lo and behold, I was representing our nation’s capital.

I had been to the capital once when I was a child so that counts, right…………?

If you really want to relish in the spectacle that is Monica Joyce Thompson at eighteen years old, please watch this never-before-discussed people’s choice video…shot entirely in Colorado. #MissDistrictofColumbia

After watching this video, you’ll understand why it was a moral imperative that I get a spray tan for this pageant.

Bad news–I had extremely dry skin on a section of my arm (you’ll learn that something always goes disastrously wrong before each of my pageants) that started to peel within the first few days of my being at Nationals. So much so, that my mom had to find the nearest spray tanning boutique in San Antonio to spray me right before the finals night. It was unsuccessful. My body got about ten shades (this is not an exaggeration) darker, except for the patch on my arm! Another awkward moment was when I walked into a cactus. Welcome to Texas.

I’ll be honest; I do not remember a lot from this pageant. I do remember eating some INCREDIBLE spaghetti and meatballs from a restaurant in San Antonio (if anyone knows where I’m thinking, I will be forever indebted to you).

I remember winning the talent, actress, and speech competitions. I remember my onstage question:

“Monica, if we had to spend an entire day with you, and you could talk about only one thing, what would that be?”

My answer was about my favorite animal. Chickens.

You have to give me credit for being original.

I remember designing my Personal Expression Jeans. You read this correctly. At America’s National Teenager, you design a pair of jeans that reflects your personality. 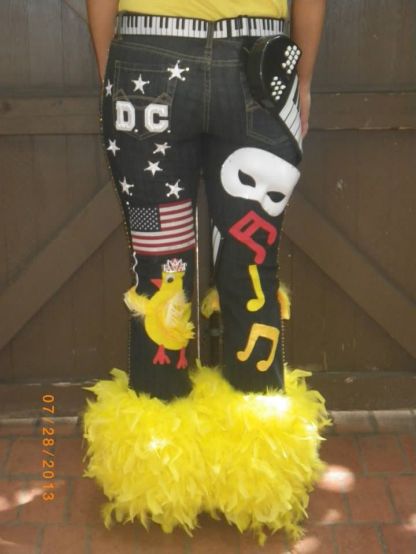 Side note, the piano on these pants was battery operated and actually worked. I thought about playing it onstage and decided against it. Wrong decision? You tell me.

My little sister and I stayed up the entire night before I left for Nationals gluing on small rhinestones and assembling felt chickens. Let’s not skip over the fact that I hot-glued yellow boas onto the bottom of these jeans.

We still find yellow feathers in our house today. By the way, I won this category at the pageant.

Maybe I can start a trend…?

The final night of the competition is all a blur. The scoring at ANTSO is as follows: 30% Interview, 15% Academics, 15% Community Service and School Activities/Leadership, 10% Onstage Question, 15% Personal Expression (the jeans), 15% Evening Gown.

Although I didn’t really know what I was doing (a common theme in my pageant experience), I do remember peace. In fact, in all my times as a first runner up, I have felt a strange calmness come over me. I don’t think it’s a coincidence–the Big Guy Upstairs has different plans. Since peace comes from God, that’s my theory.

ANYWAY, I remembered being called into the top ten and then the top five. After answering our final night question, the top five went backstage as they tabulated results. During the competition, I felt very confident. But as I looked at each of the girls backstage, I knew that I had not won. For whatever reason, I knew I was going to be first runner-up. In fact, I ended up predicting the correct order of the top five finishers.

In other words, I ended up being very, very close to a full tuition scholarship. That was the hardest part of losing this pageant.

I received a half-tuition scholarship to attend Oklahoma City University. I decided to take it.

Sometimes I wonder what it would have been like to win that pageant. I wouldn’t have had to take out student loans. I wouldn’t still be paying off student loans (oh, the joy). But I also probably wouldn’t have competed in the Miss OCU pageant. If I hadn’t competed there, I would have been a very different person than I am now. And yes, I’ll be blogging about Miss OCU and my Miss Oklahoma experience a little later. 🙂

-You don’t need to have a lot of money to do well in a pageant.

-You can go to incredible places and meet some pretty awesome people in pageants.

-How to fasten a crown on your head

-God knows better than you do. (I must need this lesson, because I learn it a lot!)

As you watch Miss America 2018 this Sunday, think about the hard work and dedication each girl has put into getting on that stage. Be kind in your words, but cheer for your favorites. 🙂 I’m ready for the Pageant Super Bowl!!

I’ll see you next week when I blog about my Miss Colorado first runner up experience.

One thought on “Being a First Runner Up (Part Two)”